Who:  IFFF Wild Trout Flyrodders
What:   A Great group of very fine IFFF casting instructors will be on hand to teach you about casting or help you tune up for the spring!
When:  May 2-4, 2014
Where:  Catskill Fly Fishing Center & Museum, Livingston Manor, NY
Info:  http://wildtroutflyrodders.org/casting-rendezvous/
Posted by ityeflies.com at 12:32 AM No comments:

Umpqua announced today that all of its leaders
and tippet materials shipping in the recently
redesigned packaging system are new and
vastly improved products. Over the past year
and a half, Umpqua has been integrating the
new and improved product into the previous
generation of packaging. Umpqua’s leader and
tippet manufacturing partner has consistently
invested in the most modern, cutting-edge
equipment that allows for more accurate tolerances
during the extrusion process, providing even
greater consistency and reliability in the materials
and designs.

The announcement of the improved
leader and tippet product lines
coincides with Umpqua’s launch
of an entirely redesigned packaging
system. The new leader packaging
reinforces Umpqua’s 40 plus year
approach to enhance the angler’s experience and
performance. Containing the industry’s most reliable
and consistent leaders, the packaging displays the
distinguishing, product specific information (type of
leader, length, strength, etc.) at the top of each
package, allowing anglers to sort through multiple
leaders and select the desired leader without having
to remove them from the vest/pack pocket.

Posted by ityeflies.com at 11:45 PM No comments:

We're pleased to welcome the very talented Vince Wilcox
to our elite Signature Fly Designer roster. With a father
as a guide and tyer, Vince started tying flies at age seven.
Now an established designer with several years’ experience,
he has over thirty fly patterns that are sold commercially,
including the JC Special, the Superman, the Little Green
Machine, and Glo-Ants.

“I am grateful for the opportunity to join the Umpqua staff and
looking forward to bringing new effective and innovative flies
to the already great line up.” —Vince Wilcox


Heralded as “the most creative and unorthodox tier of his
generation” by Ross Purnell of Fly Fisherman Magazine,
Vince now owns and runs Wiley’s Flies, located in the heart
of the Adirondacks in Ray Brook, NY in between Lake Placid
and Saranac Lake, and offers float and wade trips for trout,
landlock salmon, bass, northern pike and musky. As a
production fly tyer he has tied hundreds of thousands of flies
and when he’s not busy writing, running his on-line store
and tying flies, he is guiding in Colorado, Idaho, Wyoming
and mostly on the northern Adirondack streams targeting a
variety of species.
Posted by ityeflies.com at 11:58 PM No comments:

It is with heavy hearts that we announce that the founder of Umpqua Feather Merchants, Dennis Black, passed away this morning. An avid angler and gifted fly designer and tyer, Dennis had a profound impact on many of us here at Umpqua, as well as on the entire fly-fishing industry as a whole.
Back in the late 1960’s and early 1970’s, Dennis realized a unique opportunity to alleviate the shortage of quality hand-tied flies created by an increased national interest in fly-fishing. He knew that the growing demand for high quality flies would soon outstrip the abilities of independent tyers to produce them.
A well-traveled and knowledgeable young man, Dennis knew the high quality and precise detail of the arts and crafts being produced in India, Sri Lanka and Thailand. He came up with the idea to develop a fly tying factory in India that would use highly skilled and specially trained young Indian women to tie the designs of American designers. He entered into a partnership with A. Joga Rao of Madras, India, and personally trained him — and his tyers — in the art of fly-tying.
Fully aware of the negative stigma of non-domestic fly quality, Dennis persuaded expert tyers — like Dave Whitlock, Mike Lawson and Randall Kaufmann — to give him exclusive rights to tie their flies commercially and enlisted their skills to establish extremely high standards of excellence — standards on which he refused to compromise. Orders for flies quickly outgrew the production capability of the factory, so Dennis expanded production capabilities of the factory and created new, dedicated factories and the foundation of what Umpqua Feather Merchants is today.
But the most important development that Dennis can be credited for was the creation of a royalty payment system to reward the imagination and skill of professional tyers, and to encourage emerging new talents to foster their creativity in the realm of fly design. As a commercial tyer himself, Dennis considered this to be paramount to the success of Umpqua Feather Merchants. Dave Whitlock writes in the introduction of Randall Kaufmann’s “Fly Patterns of Umpqua Feather Merchants, “Without Umpqua Feather Merchants, many talented amateur and professional fly tyers would never have been encouraged, recognized, or paid for their contributions and creativity. Creativity that seldom would have progressed past the fly tying bench or local angling waters now flows into the international arena of fly fishing that Dennis helped create.”
Today, Umpqua has well over 150 royalty tyers who profit, both financially and creatively, from Dennis’ innovative ideas. Even those designers contracting with other fly companies owe Dennis their gratitude for his foresight.
We here at Umpqua, and those throughout the entire world of fly fishing, have lost a true visionary this day, and are deeply saddened by his passing. We wish his wife Maew and those surviving Dennis our heartfelt condolences, and express our eternal gratitude, respect and admiration to such an incredible, innovative and ingenious man.
Posted by ityeflies.com at 12:13 AM No comments:

Be there September 26-29, 2013 in West Yellowstone, Montana. Great fishing at that time too!
Posted by ityeflies.com at 12:11 AM No comments:

The CFTG Annual Fly Tyers Rendezvous will be this coming Saturday, April  20 from 10-2:30 at the Rockland House, Roscoe, NY. A good time will be had by all.

Posted by ityeflies.com at 12:19 AM No comments: 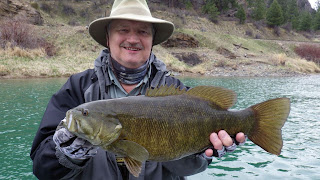 Here's Larry Gibbs with a near state record smallie on the Flathead River (MT). Nice fish!
Posted by ityeflies.com at 11:41 PM No comments: