As some of you know, I am on a quest to find the perfect nippers. Here I made a chart in which I weigh cost and performance:


Maybe I am a tough critic, but are there any awesome nippers out there? Looked into Fishpond "Pitchfork Clippers," but at $22 I passed them over. Same deal for the $17.95 Clip & Knot by Sports Tools. It's hard for me to shell out a fortune for something I can get for a buck. One "Pitchfork Clippers" is about 22 years worth of nippers if I buy one drug store nail clipper each year.

Posted by ityeflies.com at 3:04 AM No comments: 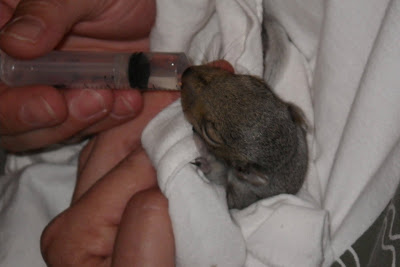 I was driving down my street and saw this little grey thing moving in the street. Being the animal-lover that I am, I pulled over and scooped up a baby squirrel. I know what you are thinking...baby fly tying materials. No, I put the little guy under a bush off the road. Maybe his (yes it was a male...I checked) mom would come to retrive him. I came back 2 hours later and the fella was still there. It was getting cold and late. Needless to say I brought him home and snuggled him in an old T-shirt, in a box with a very low heating pad. Gave him a little water. He was very sweet. Sadly he did not make it through the night. Preliminary autopsy results (just kidding) reveal that he had a gash on his belly with a bit 'o his entrails hanging out, likely from the neighborhood hawk steeling him from his nest. He must of had bad internal injuries. Very sad, but I had never held such a tiny squirrel. Actually I don't think I have ever even touched a living squirrel.
Posted by ityeflies.com at 1:21 AM No comments:

Had a little trip to the Squannacook River in the Groton and Townsend (MA) areas. It was a pleasant surprise. Nice trout were present, as was a slew of beer-drinking teenagers. Move up or down stream away from them and you are good to fish. It was really quite beautiful. My friend caught a brookie and I got a good sized trout that managed to throw the hook as I was bringing him in.
Posted by ityeflies.com at 11:55 PM No comments: 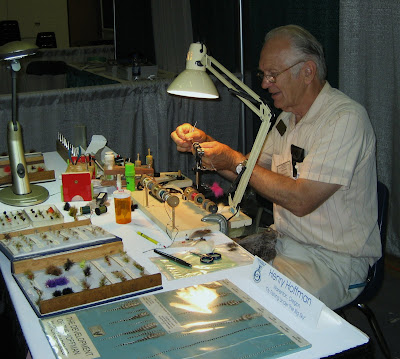 2007 Federation of Fly Fishers Annual Conclave
in Livingston Montana. This year's Conclave will be August 26-28 in West Yellowstone Montana. I bet you will be able to see Henry tye if you attend. Check out http://www.federationconclave.org/.
Posted by ityeflies.com at 1:06 AM No comments:

We've all been following the environmental disaster in the Gulf of Mexico. It looks like the "Top Kill" method has worked...lots of fish, birds and other animals are being killed by the oil. Oh, and by the way, since when does shooting mud into a GUSHING oil well stop the leak. I am no engineer, but that sounds stupid. The powerful gush certainly will drive the mud right back out. That reminds me of high school physics. So now we will have oil-soaked mud. Great. This whole debacle caused by BP and the US government makes me think of creating an award for bone-head moves.
Posted by ityeflies.com at 12:40 AM No comments:

Learning From A New Fly Tyer

In January I had my regular fly tying table at The Fly Fishing Show in Marlboro, MA. It's pretty much the same routine as tying at home except that I bring my things to a show and tye flies for the viewing public and talk with folks. Just need to set up and I am good to go. Ah, but what's different than my usual home routine is that I am sharing the large (larger than my office) room with a slew of other tyers and vendors of various fly fishing and tying items. Very nice.

One of the days of the show was even more intriguing and different than a usual tying day at the show. On Sunday I brought my thirteen-year-old fly tying student, Ben, to the show with me to stay the day. He came to the show with his allowance money and a little extra loot from his father. He was beside himself with excitement. Probably like many of us are as we pull open the door to a show. Think kid in a candy store. Very nice.

Ben has been an enthusiastic student of fly tying now for about 9 months. He really enjoys it and our time together. He has progressed at a rocket pace from his first woolly bugger. He found it tough and foreign in the beginning, but he has become a natural, having moved into the world of woven nymphs. Each week I introduce him to new materials and techniques, most of them my tried and true techniques. Ben has been to fly shops, read books and discovered his own particular way of executing tying maneuvers. Good. He is thinking on his own and not just always doing things the way I show him. Very nice.

It was a slow Sunday at the show and Ben and I had time to walk around. We had lunch, bought tying materials and fly boxes, which he loves to fill for the anticipated spring fishing season. Of course, I introduced him to a bunch of my cronies at the show. I told Ben to go to the tyers, watch them tye and ask questions about technique and materials. Later in the day, I took a break from my tying table and we walked around a bit more. I suggested that we take some time to stop and investigate a few particular tyers. Very nice.

What happened for Ben was exciting for me to watch. He was very focused on Dave Brandt as he demonstrated the figure-eight method of tying wings on a classic Catskill dry fly. Ben and I had been setting the wings one way, with which Ben struggled. Ben was asking Dave about finesse, thread control and the proper handling of the wings when performing the figure-eight. He looked at me with a very pleased look and said, “I like this way better than yours.” Very nice.

It was also rather eye-opening for me to watch the tyers. Usually at a show, I don't have a lot of time to look at the techniques of others. After all, I have my table to manage and my work to show people. I realized that when I sit at my table I do miss out on what is going on at other tables. I had the chance to watch the show and the tyers through the eyes of Ben, a new fly tyer, and I liked it. So, the moral of the story is take time to bring a kid into fly tying; it will be good for both of you. Very nice.
Posted by ityeflies.com at 1:35 AM No comments:

There is plenty of junk already littering the environment. Don't dump. 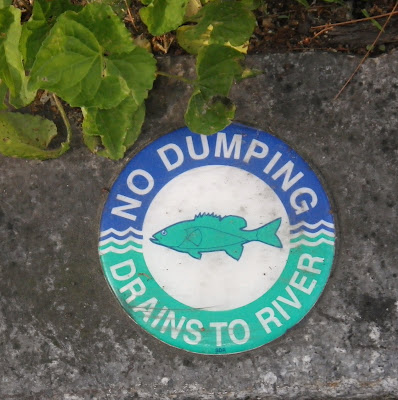 Posted by ityeflies.com at 12:13 AM No comments:

A Bass & A Parachute Ant 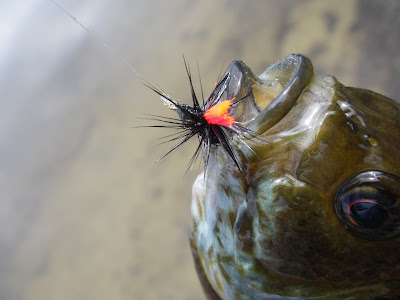 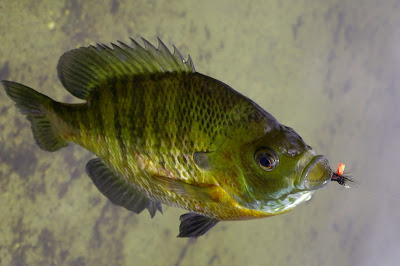 Fun to play with new camera.

Posted by ityeflies.com at 12:45 AM No comments: 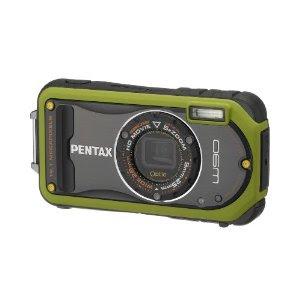 Just got it. Love it. So far it really is and does everything it is billed as capable of. Great fishing camera. After more use a review will follow.
Posted by ityeflies.com at 5:33 PM No comments:

Why is it just utter buffoonery to ban felt soles on wading boots? Well, it's not only the soles of boots that carry invasive organisms from one watershed to the next. Doesn't didymo and other junk get carried on neoprene booties, boot laces, foam padding, webbing and cloth on boots, little cracks and crevices, seams, stitching and every part of the boot? On waders? Flies? Rods and reels? Lines? Nets.

Let's not forget all those animals that tromp in the water and spread yuck. I have said this before and I'll say it again: birds don't wash up when they travel between watersheds.

Get real. Banning boots is not the solution. Try washing. Use a dilute bleach or salt solution. Give your boots a soak and you are set. Do you think the manufacturers are lobbying for the felt ban so that they can sell us new boots? Ah, yes. They are probably drooling to sell you boots.
Posted by ityeflies.com at 12:33 AM No comments: 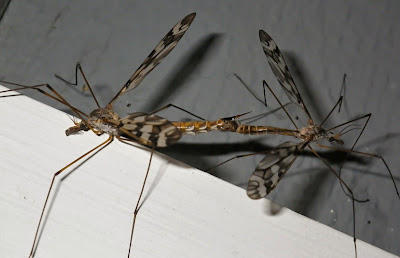 Vince Wilcox not only tyes some great flies, but he also catches nice fish and takes slick photos. Howdy Vince. 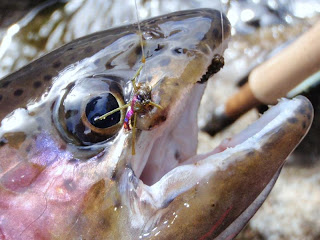 Posted by ityeflies.com at 2:03 AM No comments: 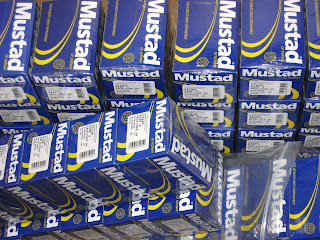 Posted by ityeflies.com at 2:22 AM No comments: 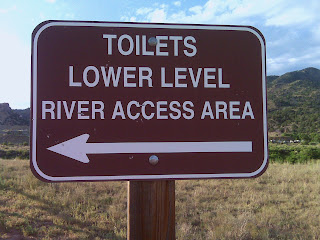 Posted by ityeflies.com at 2:10 AM No comments:

Now available on my website (http://www.ityeflies.com/). So new I have not gotten to upload information yet.
Posted by ityeflies.com at 2:36 PM No comments: 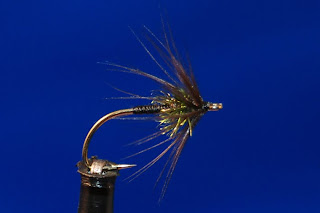 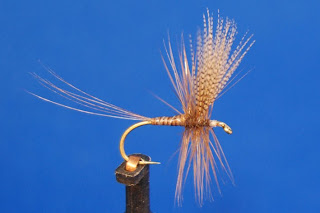 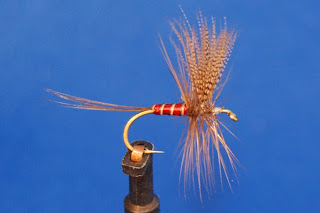 Posted by ityeflies.com at 8:08 PM No comments:

From the guys who brought us Nymph-Head tungsten beads comes another innovation. Skulls come in three sizes with weights of about .5 grams (S), 1.25 grams (M) and 2.5 grams (L).

The Fish-Skull™ design mimics the head, eyes and gill plates of a baitfish producing a more realistic looking profile. The skulls come in 7 cool colors (silver, white, blue, tan baitfish colors and golden chartreuse, dark grey, coppertone and pink/purple. There is a recessed pocket to apply the included 3-D Eyes for that look that predators cannot resist. The skulls are suitable for fresh or salt water patterns and are corrosion resistant. The skulls are also weighted with about 70% of their mass being on one half (top/bottom) so that they can be used to keel the hook to ride upright or inverted. Cool item. Check 'em out at your local fly shop or at http://www.flymenfishingcompany.com/. 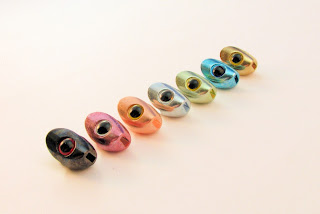 Posted by ityeflies.com at 12:31 PM No comments:

Hit this spot today. Large pond or small lake...take your pick. Loaded with all manner of fish. Lots of downed trees and limbs creating fish-holding structure around the shore. My friend, the K-Dog, caught an enormous bass. Kayak or canoe required due to limited shore access.
Posted by ityeflies.com at 2:00 AM No comments: 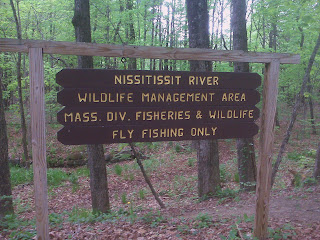 Hit the Nissitissit River and was not impressed. I found no fish. There was plenty of quicksand sucking me into the core of the planet and mosquitoes, though. The bottom is mostly the mucky remnants of early industrialization in the Northeast. Report: Frog water, don't bother going.
Posted by ityeflies.com at 12:19 AM No comments:

These photos are from The Norwegian Fly Shop, which showcases many fine Nordic tyers.

Posted by ityeflies.com at 1:23 PM No comments:

This is one hot sculpin. 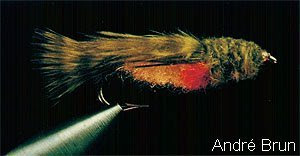 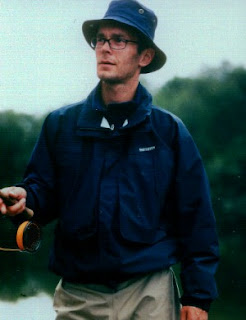 Posted by ityeflies.com at 12:38 AM No comments:

Here we have The Stick Caddis, BEAMOC Caddis and Paper Cloth Caddis. 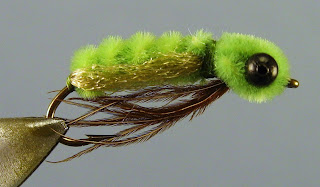 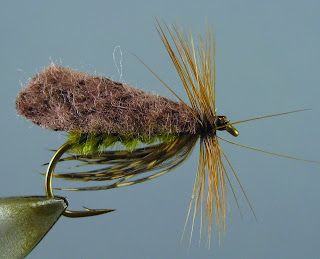 Posted by ityeflies.com at 12:59 AM No comments: