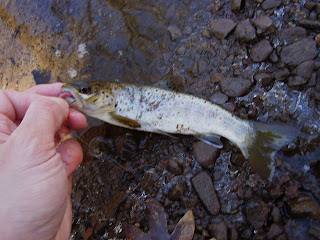 A friend, Josh, just emailed me a snap of the Vladi Worm at work on the stream. He reported that, "I was fishing the Farm River which is a small stream running through North Branford and Branford, CT. It has a population of native brookies and a self-sustaining population of brown trout that were first introduced by some ancient fishing club at Yale."

Thanks Josh.
Posted by ityeflies.com at 12:23 AM