Meaty Flies At The Canadian Trials 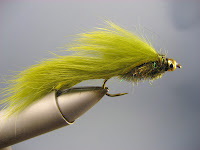 The wading on the River Diable was treacherous. Ironically, the name of the river suggests the conditions. The tea-stained water was raging and large slippery rocks and deep plunge pools made for tricky and scary wading. Hidden in the river, however, were some beautifully-colored brookies and browns. I managed to catch quite a few of both, but netting them was another story. Times like that I wished I had a few extra hands to coordinate the net, manage the rod, guide my wading staff and hang on to the rocks. In the end I managed to get four fish to the net and measured for recording in the competition with about a dozen plus solid hook-ups only to be lost in the whirl. Practice sessions on the river saw nine in the net and a few lost. The difference was the heavy rain that fell between the practice sessions and the competition sessions.

The lake sessions at La Baroux were another story. Three lakes and no fish. In practice I had four, but in the end I was disappointed. I don't really want to complain as the days were gorgeous and fishing is still my favorite pastime. I guess catching is another story.

The fly of the competition was the Olive Bunny Stripper. My teammates Morgan Thorp and Jason Baxter hammered fish on this fast sinking fly that is best fished on a deep sinking line. The retrieve is fast and the fly darts through the water drawing aggressive strikes.

Posted by ityeflies.com at 4:51 PM