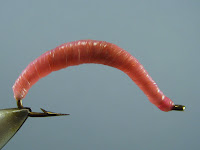 The International Fly Tying Symposium went off with flying colors. Despite the dismal economic situation, there was a brisk showing of attendees coming in to see a wide variety of amazing tyers. A host of international tyers from the UK, Spain and elsewhere in Europe joined in with US Tyers. Every type of fly was tyed from amazing ultra realistics to giant shark flies. My version of the Vladi worm was very popular with tyers and spectators alike. The Saturday night banquet was loads of fun with good food (yes really), good company and splendid entertainment. Chuck played a video documentary film about George Harvey and his legacy of teaching fishing and tying. Dick Talleur revealed his humorous side as did Ted Patlin in each of their stand up routines.
Posted by ityeflies.com at 10:44 PM